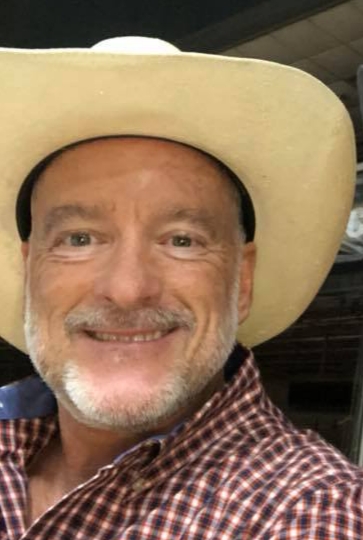 Patrick Terry was born and raised in Denver, Colorado, where he learned to ride horses at an early age. As a young man he worked as a manager in a department store and traveled with Up With People. In 1987, Patrick started working at Charlie’s in Denver, where IGRA founder Wayne Jakino encouraged him to become involved with gay rodeo. Patrick joined CGRA in 1988 and served as the IGRA administrative assistant for 10 years between 1993 and 2003. In addition to participating in both CGRA and IGRA events; serving as rodeo director, finals rodeo director, and on various committees over the years; Patrick was also instrumental in collecting and preserving many of the IGRA archival materials now curated at the Autry National Center. He was inducted into the IGRA Hall of Fame in 2012.

The most important thing at all of this [...is] the camaraderie and the friends. You meet friends that become your family and [...] you really do care about them. It's not that I don't care about my immediate family, but these people mean a lot to me.

This association is very unique, we don't do rodeo for a living. [....] All proceeds go back to charity. That's why we do this, to be able to give money back to charities.

I had my injuries. I definitely did. Broke both collar bones, almost every rib, and got stepped on [...].

My mother refused to come watch. She [...] supported me, she just didn't want to see me in case I got hurt.

How did you find gay rodeo?

What was your experience coming out?

My little brother, was gay. [....] And I have always said he paved the path for me to be able to come out because it was so much easier for me [....] My father never knew that I was [gay] before he passed away but my mom, I told her right away. I said, "You know, this is it. I am this."